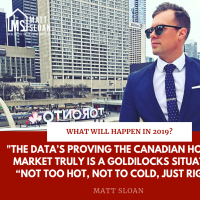 Share
It’s a new year, which means new opportunities. And everyone wants to know: what’s going to happen to the real estate market this year?
There’s no doubt that housing markets can be historically difficult to predict. However, when we look at the data and start to see the emerging trends and patterns surfacing, it can identify strong clues.
Let’s quickly recap what happened in 2018, which was similar to the year previous in respect to the condo market specifically. 2017, once dubbed as “The Year of the Condo,” we continued to see an increase in interest for the downtown core condo market — and all across the GTA in 2018.
Vacancy rates for Toronto were stable, at low levels of 1.1 per cent and 1 per cent, respectively. We also started to see a slight correction in the market for townhomes and detached homes outside of the 416-area code. There was a total increase of 8% on average for home prices in the GTA (still above the 35-year average of 6.57%) indicating we’ll see moderate price growth.
So, what’s to come for 2019 in the real estate market? There are reasons to feel optimistic.

Prediction 1: Buyers who get in early on the spring market will get the best value for their money.

The saying “all real estate is local” isn’t just a catchy saying; it’s rooted in fact. The best time to buy (or sell) in your area depends on its supply and demand, along with varying other factors that are local-specific (climate, employment, economic, etc.)
More listings and more supply mean buyers have more choice. That’s simple mathematics. With the condo market still being in high demand (especially in the nucleus of Toronto) the best time to get in on detached or townhomes is now.
As the saying goes: the early bird catches the worm and being first in the spring market is ripe with opportunity.

While the stress tests were rolled out in an effort to cool the markets and mitigate household defaults on debt, the government will likely take an iterative approach towards policies. As the 2019 election approaches politicians will likely include varying initiatives to make mortgages more accessible (especially to first-home buyers) as part of their campaigns.
Identifying which areas or neighbourhoods are more likely to see price corrections versus others has more to do with trends than simply an unexplained matter of chance.
It’s important to understand how to strategically maneuver within different neighbourhoods and areas that have seen high rates of activity.
A general rule of thumb is to be selective in areas that have seen high rates of investor activity leading up to the peak. This theory is based on the belief that sharp increases can easily equate to sharp declines soon-after.

Prediction 3: The condo market will stabilize as prices catch up to freeholds

The condo market is quickly becoming as-expensive (or more) than freehold-detached properties, especially when buyers start to equate their value for dollar to the size of the home.
We will likely see freehold townhomes, detached and semi-detached see a moderate surge in growth as the condo market continues to climb in rental costs and condo fees.
What’s my notion that proves we won’t see a “Canadian housing market crash” anytime soon?
In an article in Global News, John Pasalis, President of Realosophy Realty explains it simply:
“If you look at the subprime mortgage crisis that happened in the U.S. (specifically, Miami, Phoenix, Las Vegas) those cities we’re overbuilt, and that’s not what’s happening in Toronto right now.”
Rather than a housing collapse, a more likely scenario is one in which home prices stagnate as household incomes slowly catch up, Pasalis added.
When it comes to making predictions on what will and won’t happen in 2019, the data’s proving the Canadian housing market truly is a goldilocks situation, “not too hot, not to cold, just right.”
Tags: - 2019 real estate predictions - buyers market - market predictions - real estate advice - real estate investing - sellers market - Toronto Real Estate