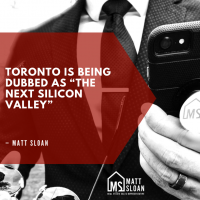 In case you didn’t hear, there’s a tech boom coming to town. Toronto is being dubbed as “the next Silicon Valley” and major tech companies are moving new head offices to our own backyard. I don’t know about you… but I hear opportunity calling.

In an article in the Huffington Post, Toronto’s tech boom has already brought an influx of tech companies coming into Toronto’s downtown core and added 82,000 jobs (and growing) in technology so far to date. This is more jobs than Silicon Valley and any North American city, according to a recent report from CBRE.

New jobs bring added housing demand. While we might have to wait and see what happens — what it does propose? Is an early opportunity for those thinking about getting into the market but we’re waiting for the right time.

What we can be sure of, is that new industries and organizations popping up all over Toronto in the tech space, are fuelling the potential for a major investment boom.

Keep in mind, early adopters have historically received more profitable investments over time, so if you’ve been contemplating it, this news should get you thinking about making a move… and fast.

Toronto prides itself as one of the most diverse cities in the world, and with it brings an array of new industries and leadership perspectives.

Although some part of this real estate momentum might feel like it’s surfacing overnight, Toronto’s tech boom has been decades in the making and the time has come to invest in properties that will support this growth now.